Helping you channel your full potential

It’s important to understand the types of ownerships in multifamily housing. It is one of the biggest differences between multi-family and single-family. Knowing and understanding the different kind of ownerships will influence the way you manage an asset. Below are the 4 most common types of owners in multifamily housing. Leasing is the key revenue source. Our job is to maximize the value of the asset. Excellence in your performance in leasing will impact the value of the asset on the market. Even $20 more on a 250 unit property can equal close to $1million in value! Our job is to maximize the investment spent to generate traffic and follow-up on every lead, and to make every dollar count.

Learn about the people that pay you

This 2013 report contains still-timely data on the economic role of the apartment industry. Commissioned by the National Apartment Association and the National Multi Housing Council, Stephen S. Fuller, Ph.D., of George Mason University’s Center for Regional Analysis, developed the math behind these economic impact numbers. Fuller began by examining all the dollars directly spent on building new apartments, operating and maintaining all existing apartments and by apartment residents in their daily lives. He then analyzed those dollars to determine how many jobs that spending directly supported. Using government data, he calculated how much additional spending and jobs supported that direct spending spurred as it cycled through the economy. The final result tallied apartments’ total economic contribution and jobs supported, as well as additional data points. 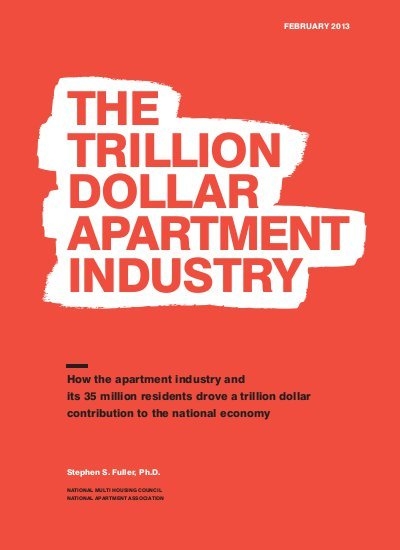